I respect the opinion of Michael Heiser as a Semitic scholar. So I recently asked him what he thought of Randall Younker and Richard Davidson’s argument that the Hebrew word raqia’ (often translated “firmament”) does not imply a solid vault or dome—and that this view was actually introduced in the early 19th century by skeptics Washington Irving and Antoine-Jean Letronne. Younker and Davidson document how Irving and Letronne simply invented the myth that ancient peoples believed the earth was flat, and argue that this fabrication, in conjunction with a questionably wooden reading of Scripture, became the mistaken basis for the Hebrew cosmography shown in the image below.

Suffice to say Michael was not persuaded. I’ll not assess his reasons here; I’m far less convinced than he is, but that is a topic for another article. What I’d like to do here is actually assume for the sake of argument that the “standard” view is correct: the Bible really does depict a cosmography more or less as represented in this diagram.

On the face of it, this seems to put inerrancy in serious jeopardy.

But I have a question:

If the Bible depicts a Flat-Earth-Solid-Sky (FESS) cosmology, does that mean its original audience believed the world was flat and vaulted by a cast metal dome? 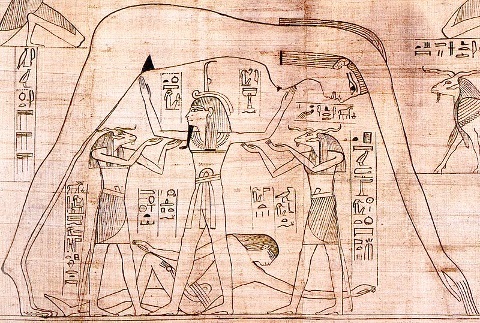 Well, let me ask you another question: do you think the Egyptians believed they lived on the surface of a god named Geb who was lying beneath another god, Nut, who was held up by a third god, Shu—and that when they looked up at the sky, what they were seeing was actually Nut’s exposed breasts and midriff, along with of course Re, the sun-god? As you can see in the photograph, that is how the Egyptians depicted their cosmography.

Some people look at pictures like these and think, “How on earth could anyone believe that?”

In other words, the issue is not with what the Egyptians and other ancient peoples believed, but with what we believe they believed. It strikes me as prima facie absurd to think that anyone in the ancient world took these images as depicting something straightforwardly true.

I say “straightforwardly true” or “straightforwardly literal” to pick out the sort of naïve what-they-said-is-what-they-meant view which interprets, for example, a comment about the sun rising as implying that the sun literally elevates from the ground and travels through the sky; rather than that it literally appears to do this. The words “true” and “literal” in isolation are impossibly ambiguous.

I mean, there’s unscientific thinking, there’s superstitious thinking, and then there’s just plain stupid thinking. For us to suppose that cosmographies like these were understood by their creators as straightforwardly literal depictions of the physical world is surely for us to engage in intense chronological snobbery. Would we prefer to imagine these people were absolute dunces—in which case, maybe we should try building a pyramid to disabuse ourselves—rather than to allow that perhaps their cosmographical descriptions were meant to depict something other than physical reality?

Which is more plausible—that ancient peoples believed things their own eyes could readily confirm was complete fiction…or that we have misunderstood them?

Some questions about Hebrew cosmography in this vein

These sorts of questions point to how implausible it is that FESS cosmographies were taken in straightforwardly literal terms. Now, this doesn’t tell us how they were taken, but it should give us pause about presenting the Hebrews as people with bizarre geographical and cosmological beliefs.

Let me put a contrary suggestion: what if this is a pseudo-scientific account, as understood by the people of the day? In the recent past, we’ve had several different “models” of the atom, with different images to explain them. No-one thought them the be-all and end all, but instead they described “a truth” about their observations.

It strikes me that the Genesis 1 account takes a *model* of creation, and re-interprets it to show YHWH as lord over all. It’s not the only way of describing what happened, nor the last word on the mechanics, but it makes a point to the audience (who might not have shared the same assumptions as a C20-21 audience).

This reminds me of a book I read (I’ll have to research it to find it again to get you the title) that dealt with Greek mythology and the way that various cultures have assigned meanings to constellations and such. The argument this books made said that the mythologies were invented as a navigation tool to help, especially with seafaring people, navigate to specific areas on Earth using the heavenly bodies as waypoints. That is, they were never intended to be literal histories, but were instead meant as a roadmap.

After all, Zeus wasn’t just thought of as a god, but was also represented by the planet Jupiter, Ares was Mars, Achilles was (I believe) Mercury, and so forth. So you could have a story about how Achilles ran to Ares, who attacked Zeus and what it meant was that when Mercury was aligned with Mars in some quadrant of the sky, then you could follow Jupiter to get from Athens to Alexandria. (Note: this particular example is fictional since I can’t remember the specific myths presented in the book, but it was similar to that type of story.)

Naturally, this doesn’t mean EVERY mythological story fits that type of description, nor do I claim there were NO people who ever thought the myths were actual history. But I daresay that given the fact that the vast majority of ancient people were not as stupid as atheists seem to think they were, I doubt there was anywhere near a majority that mistook the myths for reality.

Hi there, I learnt Hebrew as a college kid, and biblica; Hebrew to be exact from the chapters of Genesis.

I thought that old professor of Theodore Lutz (I think) from the University of Toronto told me that raqia is about an artisan beaten thin plate. Would this very thin plate qualify your solid dome? Because it is like a ceiling, and in it, you have to place lights, and stars, and it has to hold up to the pressure of waters above. It could not invisible and formless, it has to structurally support these items.

In Chinese ancient cosmology, Pang-gu opened up heavens and the earth. It was a plate, an egg shell if you will, that he pushed upwardly and later story tellers added pillars to support it. When the pillars were damaged in a gods warfare, the waters above this this dome tilted and spilled, and it caused flooding on the earth. So in this ancient Chinese cosmology, you have all these items, a solid but thins egg shell dome, pillars, and the waters above this dome.

What do you think? email me your opinion.
Ben

Hey Benjamin, I agree that etymologically, ’raqia derives from beating metal. The question is whether the Bible’s authors intended to convey that the sky itself is beaten metal, or whether this language reflects metaphor, idiom or the like.

To take a common English example in a slightly different category, will historians and linguists in 3,000 years argue that pop singers believed love was produced in the heart, rather than the brain, and that the heart was literally breakable? If those future linguists take the same approach to heart that modern linguists take to ’raqia, I imagine that’s the conclusion they’ll draw…