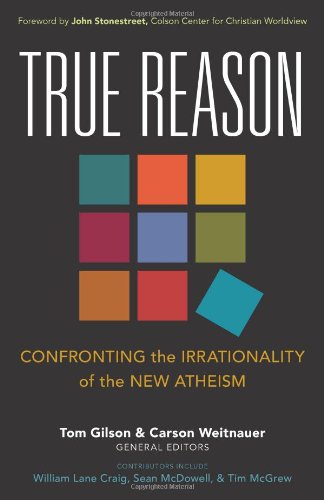 One of the most frustrating things about new atheists is their use of slogans, rather than arguments, to convince people to listen to them. This book comprehensively shows how their position is not reasonable and rational simply because they say so. Nor can they make Christianity irrational by fiat.

True Reason starts by documenting some of the major arguments used by new atheists like Dawkins and Harris, and assesses them for the qualities new atheism claims to embody: reason, logic, rationality, scientific investigation and so on. This is an inspired way to open the book. It is humorous, because it hold Dawkins’ and Harris’ own arguments (even their own words) up to the bar they themselves have set, and shows how comically short they fall; but it is also serious, because from the very outset it leaves no room for doubt that the image of intelligent, carefully-researched opposition to religion which they project is a pure sham.

Subsequent chapters step us progressively through the various ways in which metaphysical naturalism—the foundational assumption of new atheism—undermines itself; before moving us into various new atheist critiques of Christianity itself, to show how and why these fail, and what the truth of the matter actually is. Each chapter is an essay by an individual apologist, and each is strong in its own right—however, because they are separate papers arranged topically, occasionally I felt like the book meandered a little and repeated itself unnecessarily. This is not a serious drawback, especially if you just want to brush up on one or two topics instead of reading it beginning to end; but it’s worth mentioning for people who are looking for something more systematic.

Perhaps because I like systematic approaches so much, David Wood’s chapter on the explanatory emptiness of naturalism (chapter 8) particularly stood out to me. I found it noteworthy because it dissects all of the ways in which naturalism fails to justify the scientific enterprise itself, starting with the existence of the universe, and moving very logically all the way through to the existence of consciousness. It was an excellent summary of the major arguments against naturalism, and lucidly demonstrated the staggering cumulative case new atheists have to overcome to even lay any claim on rationality whatsoever (let alone gain a monopoly!)

However, the whole book is a powerful summary of the major arguments against the new atheist worldview; the major ways in which they misrepresent or falsely attack Christianity; and several of the more powerful arguments for the truth of the Christian worldview. It is an excellent book for Christians who are new to apologetics and want a single primer that will offer well-rounded instruction on all the issues they’re likely to face against atheists. But it will be equally helpful to experienced apologists who want a quick-reference manual to keep on hand for future debates. Although I would not strictly endorse everything in it (for instance, I think Matt Flannagan overstates the case against taking the extermination of the Canaanites literally), it is an exceptional resource for understanding how irrational and implausible new atheism is compared to Christianity.

Get True Reason on Amazon →